RaithTV Live is the video and audio streaming service of Raith Rovers FC.

The service began in 2012 as an online commentary service called Raith Rovers Abroad, and was envisaged as a way to keep fans from further afield involved with Stark's Park on matchdays. The service later introduced live video from Stark's Park, and was relaunched as RaithTV Live in 2015. 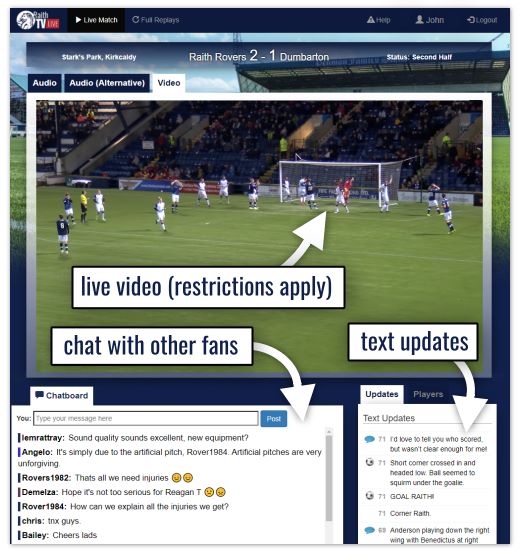 You don't have to be a Rovers fan to use the service, though! We also have a fans from other clubs tuning in when their teams visit Kirkcaldy, and you'll be made welcome.

Our interactive chat board not only lets you talk to other fans, you can also let the commentators know if you agree with them or not.

We normally offer two services - live video of home games to those outside the UK, and live audio commentaries of home and away games wherever you are in the world.

During the COVID19 restrictions, we are able to stream SPFL games to the UK for the first time. This includes free passes for all RRFC Season Ticket holders.

Sign up here. You'll be able to choose which package you want once you've registered.

* Occasionally, despite our best efforts, we can't broadcast a match due to technical issues or unavailability of our volunteers. Please check the homepage for coverage.

Copyright 2021 Raith Rovers Football Club. All rights reserved. Video, text and images may not be reproduced without the written consent of Raith Rovers FC. Live video streaming outside the UK&Eire with permission of SPFL. Raith TV YouTube